Norway is the largest exporter of electricity in Europe for 2020

North Macedonia with 35.7% import is one of the largest importers of electricity

According to the energy portal www.enappsys.com, Norway overtook France to become the biggest net exporter of power in Europe in the second half of 2020. Norway’s total net exports amounted to 14TWh, with most of the power flowing to Sweden (7.2 TWh) and Denmark (4.9 TWh). Norwegian water reserves increased steadily during the second half of 2020, due mainly to a combination of wet weather and low demand, and reached a new peak for the first time since 2015. Norwegian power prices remained low, which made it an attractive economic proposition for other countries to meet their electricity demand by taking some of the excess water from Norway.
During the winter, nuclear generation in France saw limited availability due to delayed power plant maintenance caused by COVID-19. This had a considerable impact on France’s energy trading pattern, as nuclear generation is the largest contributor to the country’s fuel mix. As a result, France often relied on energy imports from its neighbouring countries. 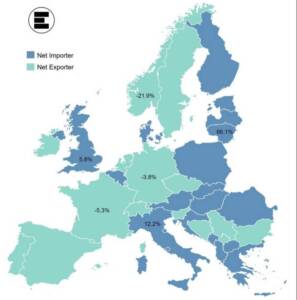 ESM on suspension of Belene investment: LNG terminal more likely to be completed within reasonable period

Кovachevski: we temporarily withdraw from investing in Belene, we are focusing on Alexandropoulis